Carolina For The Kids

Formerly known as UNC Dance Marathon, Carolina For The Kids is UNC-Chapel Hill’s largest student-run nonprofit organization. During the 2014-2015 year, the organization raised $570,561.

As the media relations subchair for the 2014-2015 year, I coordinated all media outreach including pitching, creating press materials and working with the executive committee for media training as needed.

As a subchair, I was also responsible for training my subcommittee members in media relations since many of them were underclassmen and had limited media relations experience.

Our main event of the year, the 24-hour marathon had more than 2000 dancers participate. Our final fundraising total was $570,561. Coverage for this year’s marathon included two broadcast news pieces and several print articles. 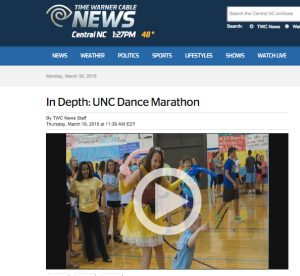 In November 2014, we announced our plans to build a $5 million, 10,000 square foot clinic for the N.C. Children’s Hospital. We invited press to our announcement and provided them with a media kit. Our efforts resulted in local coverage from the Daily Tar Heel. 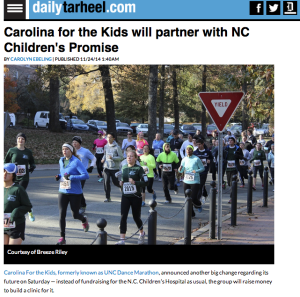 From 2012-2014 I served as a member of the copy-edit subcommittee. During that time I regularly contributed to the monthly newsletter and the blog. Here are a few of my bylines:

February 2014 (What to Expect at the Marathon)

For all posts, visit http://www.uncmarathon.org/authors/breeze-riley